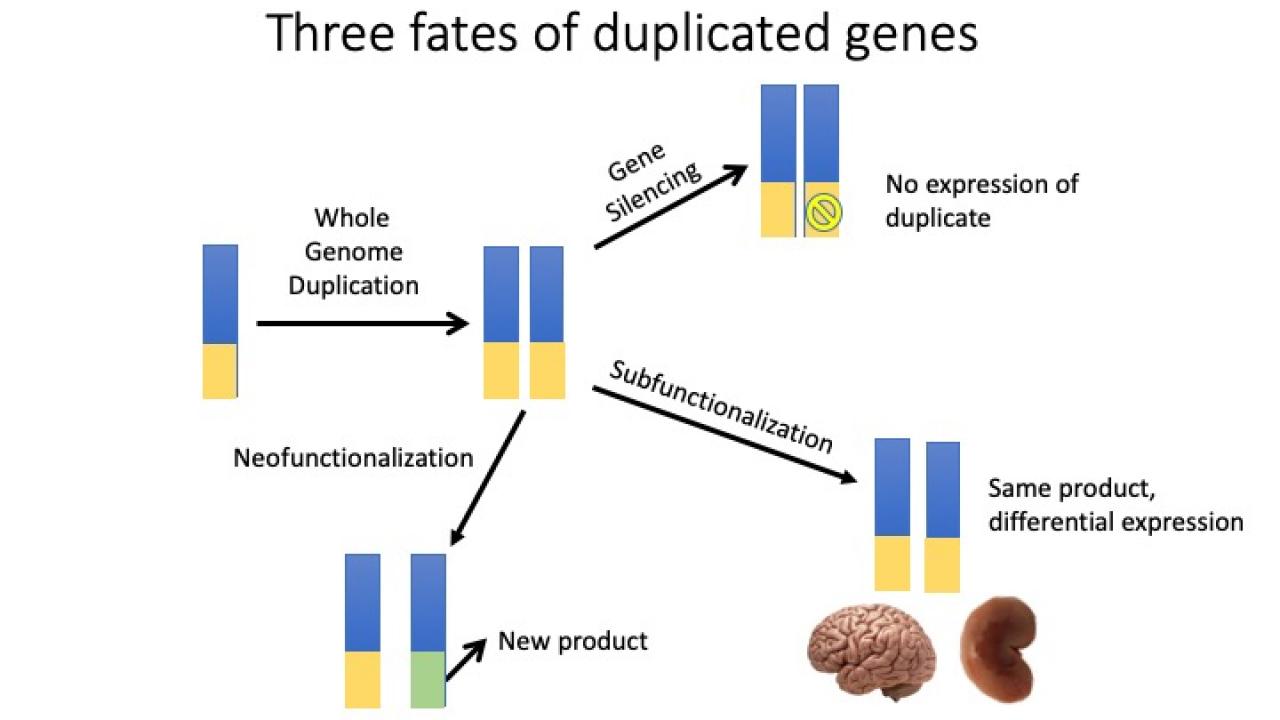 Gene duplication is an important evolutionary force because it creates new genetic material for natural selection to act upon. Immediately after a duplication event, extra gene copies become redundant because a diploid organism needs only one or two copies of each gene to be expressed. Over time, the un-needed duplicate gene copies will accumulate mutations and often their ultimate fate is to lose function, or be “silenced.” But sometimes a mutation or combination of mutations will not silence a gene but give it a new function. This is called neofunctionalization. If the new gene function is beneficial, it will be retained in a species’ genome. Important vertebrate gene families such as the major histocompatibility complex (MHC) are the result of gene duplication and retention.

Gene duplication can include not just individual genes but a species’ entire genome. This is referred to as whole genome duplication or polyploidization. When this happens, an organism acquires one or more duplicate copies of all its genes. Polyploidization has occurred many times in the flowering plants and likely was a driving force of evolution in that group. Much research has focused on the role of polyploidy in plant evolution and studies in crop plants, in particular, have shown that neofunctionalization and subfunctionalization has occurred more frequently than originally predicted. Little is known about the role of polyploidy in shaping animal genomes, however. Unbeknowst to many, vertebrate animals are ancient polyploids, as two whole genome duplication events have occurred since we split from the jawless fishes. However, hundreds of millions of years of evolution has obscured evidence for the process of gene retention and loss that ultimately led to the creation of the diploid genome (diploidization) that we and most other vertebrate animals possess. Luckily, some vertebrate lineages have undergone more recent genome duplications, allowing us to study the fate of duplicate genes on the path to diploidization.

The sturgeon and paddlefishes are a perfect lineage in which to study the role of polyploidy in vertebrate evolution. Multiple rounds of genome duplication have led to three ploidy groups, species with 120 chromosomes (Group A), 240 chromosomes (Group B), or 360 chromosomes (Group C). Sturgeon in Group A have largely diploidized genomes, meaning that most duplicate gene copies have either been lost or significantly differentiated from the original genes by evolutionary forces. Polyploid events creating Groups B and C occurred more recently, and many gene copies are not yet diploidized. Comparisons between diploidized and non-diploidized sturgeon genomes can help us characterize patterns of gene retention and loss on the path to diploidization.

To pursue this line of research, we must first sequence the sturgeon genome. As with many polyploid species, sturgeon genomes are very large and contain many sections that are very similar. Similar regions of the genome are difficult to distinguish from each other analytically and developing an accurate reference genome using conventional massively parallel sequencing technology would be near impossible. However, the linked read approach of 10X Genomics provides an opportunity differentiate between duplicate regions and create an accurate sturgeon genome assembly. The first species we are focusing on is the white sturgeon, Acipenser transmontanus, a Group B species.