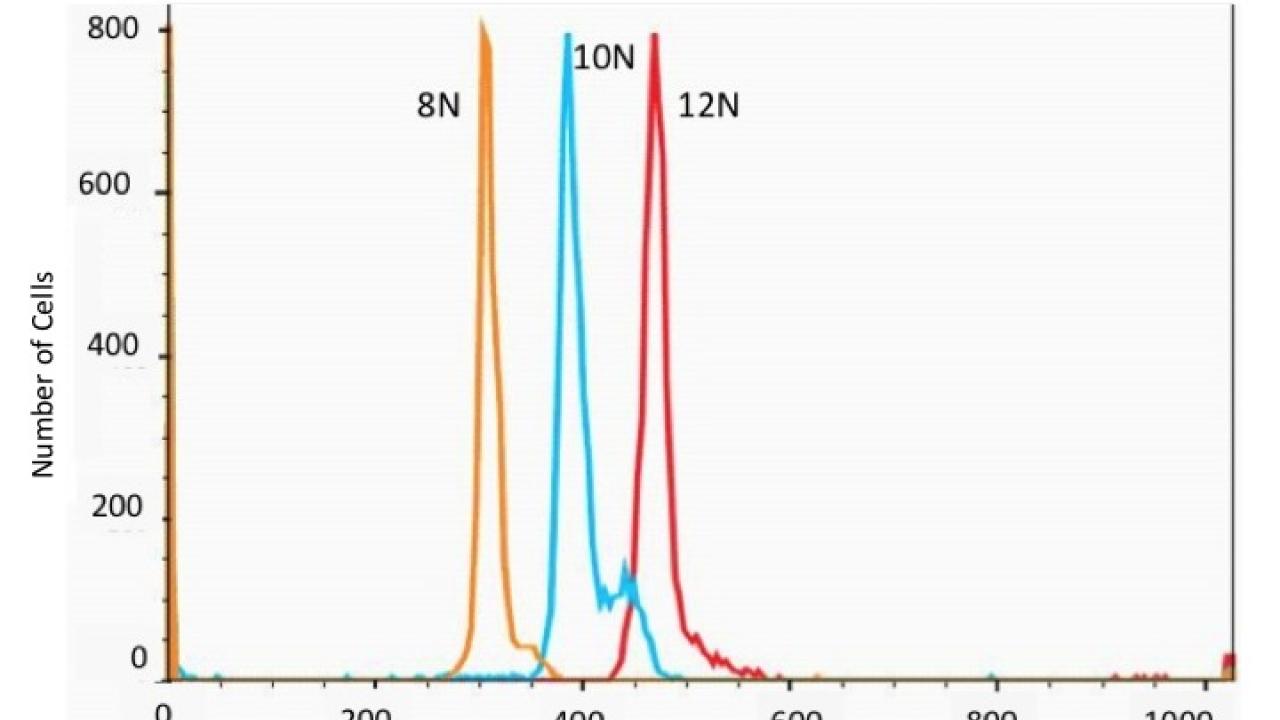 White sturgeon, like all sturgeon species, are ancient polyploids.  A normal white sturgeon is an evolutionary octoploid (8N), possessing eight genome copies.  While studying inheritance of microsatellite markers in white sturgeon families from a caviar farm, we noticed that one of the female parents had a greater number of alleles than would be expected from an octoploid organism.  Analysis showed that this female’s offspring also possessed more alleles than progeny from other families.  We returned to the caviar farm and conducted flow cytometry on six randomly sampled individuals and found that two of these individuals had abnormally large genomes. Since white sturgeon are the only species on the farm and therefore hybridization was impossible, the abnormal white sturgeon must be autopolyploids. Triploidization is not a management technique used in sturgeon husbandry and therefore any autopolyploidy occurring must be spontaneous (i.e. not induced). The spontaneous autopolyploids have a genome size 1.5x that of normal white sturgeon, making them 12N. 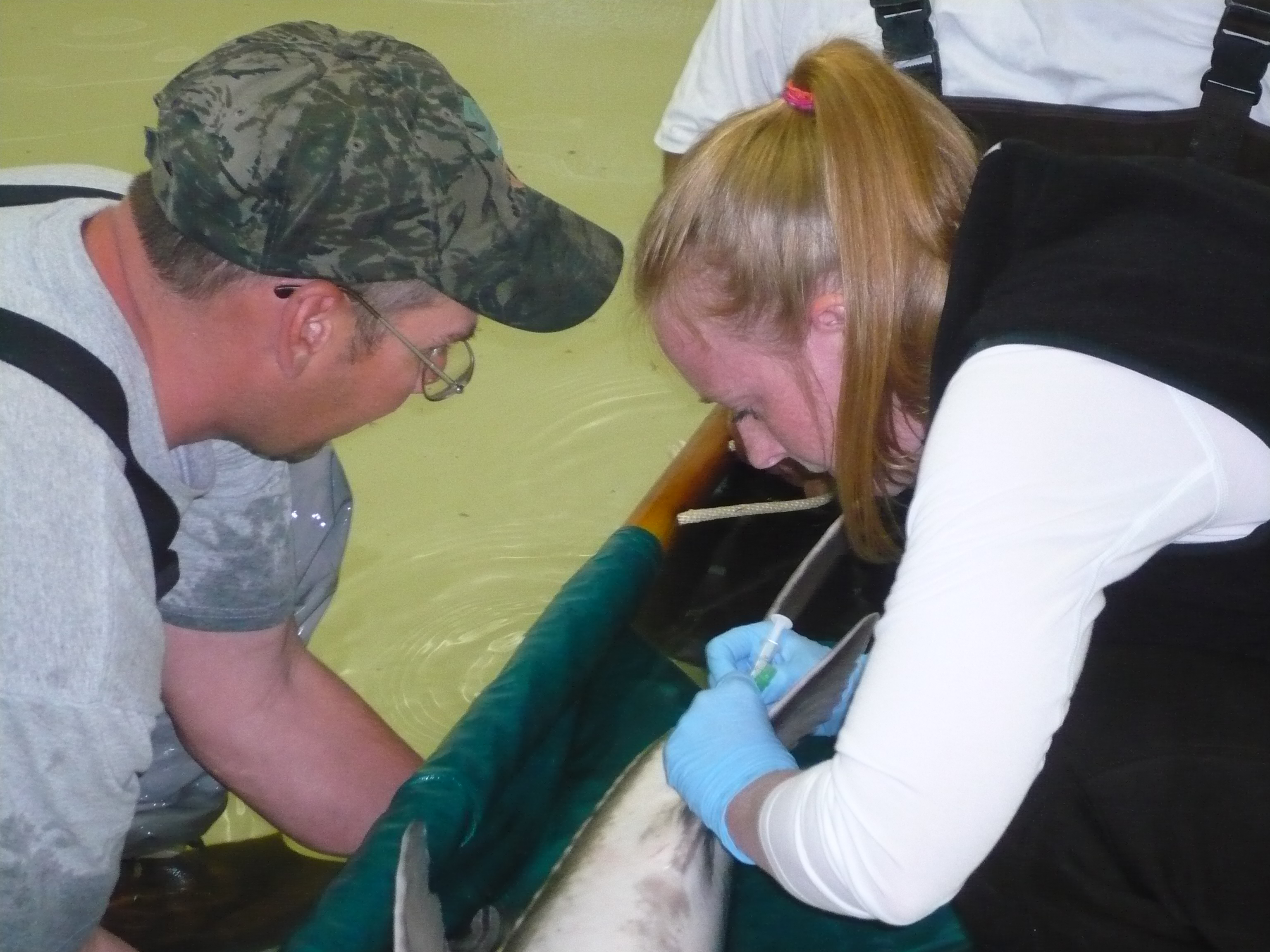 We’ve expanded our study of spontaneous autopolyploidy in white sturgeon and now have measured genome sizes of thousands of individuals from multiple captive populations. The incidence of spontaneous autopolyploidy varies widely among families. Some families contain no or very few 12N progeny while in other families the majority of progeny are 12N.  We’ve also discovered that 12N fish are fertile and when crossed with 8N adults, they produce viable offspring with an intermediate genome size of 10N.

The next step was to determine the mechanism behind spontaneous autopolyploidy in captively bred white sturgeon.  Daphne Gille worked with Tom Famula to determine that the maternal genome was duplicated and therefore the proximate cause of white sturgeon spontaneous autopolyploidy is an egg’s retention of the 2nd polar body during meiosis II.  What was yet unknown was why sturgeon eggs couldn't always complete meiosis II during artificial spawning procedures in captivity.  Another unknown was whether spontaneous autopolyploidy affected individual performance or fitness.  Preliminary data suggested that female 10N sturgeon had abnormal reproductive development. Caviar farmers were concerned that inadvertent production of 10N individuals could reduce production and conservation biologists worried that unknowingly releasing 12N fish into the wild could harm wild population persistence.

We have received funding from the Western Regional Aquaculture Center to answer the following questions about white sturgeon spontaneous autopolyploidy:

1. What aspect of sturgeon culture leads to 12N production?

2. What is the best method to detect spontaneous autopolyploid sturgeon?

What aspect of sturgeon culture leads to 12N production?

We investigated several aspects of captive spawning that might lead to 2nd polar body retention. One was post-ovulatory ageing, which refers to changes in an egg that occur in the time lapse between ovulation and fertilization.  As eggs age, the cytoskeletal components necessary for ejecting the 2nd polar body successfully begin to break down. We also tested the hypothesis that mechanical shock from vigorous stirring of eggs during de-adhesion (de-clumping) caused 2nd polar body retention. We worked working with multiple caviar farms to do experiments comparing rates of spontaneous autopolyploidy in control vs. aged eggs and gently vs. vigorously stirred eggs. Our results have been submitted for publication and we hope to have them accepted by the end of the year!

Which is the best method to determine ploidy of captive white sturgeon?

We compared three methods used to determine sturgeon ploidy: flow cytometry, Coulter counter analysis, and blood smear analysis. Flow cytometry involves staining of DNA and therefore provides a direct measure of DNA content and ploidy. Coulter counter analysis measures the volume of cell nuclei, which is increased in polyploid individuals. Because polyploid cells have increased size overall, measuring cell size parameters in blood smears should detect individuals of abnormal ploidy. Graduate student Aviva Fiske found that Coulter counter analysis was as accurate as flow cytometry but was faster, less expensive, and required no toxic chemicals. Blood smear analysis did not accurately distinguish between 8N, 10N, and 12N individuals in all situations and therefore is not recommended. Aviva's results were published in the journal Aquaculture.

We collected a variety of data to answer this question. First, we studied the reproductive development of 200 10N juvenile white sturgeon over five years.  We also measured the ploidy of “non-reproductive” white sturgeon from a caviar farm and age-matched controls.  Females classed as “non-reproductive” were those that have surpassed the age of normal sexual maturation (age 8 years) and still had not produced caviar. We wished to determine whether or not there was a relationship between delayed sexual maturity and abnormal ploidy. These results are being prepared for publication.

Our collaborators from the Todgham lab conducted experiments comparing the response of 8N and 10N and 8N and 12N individuals to stressors under ambient temperatures and elevated temperatures expected under climate change.   They found that 10N and 12N individuals have fewer, larger blood cells and exhibit some metabolic differences relative to 8N individuals. The 10N individuals seemed to rely more on anaerobic metabolism than 8Ns and 12N individuals were exhibited differences in enzyme metabolic activities when exposed to warming and after exposure to acute stress. Graduate student Michaiah Leal published two papers describing these findings (see "Publications" below) and has submitted an additional paper for publication.