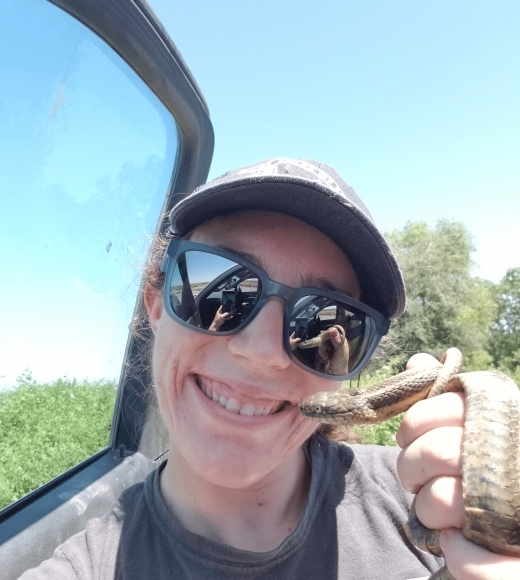 I am interested in how color polymorphism is associated with the genetic distribution and behavioral thermoregulation of reptiles in fragmented and heavily modified habitats. The giant garter snake (Thamnophis gigas), a federally threatened species, has lost most of its historical marsh and wetland habitat to land conversion. However, this species has responded by utilizing the semi-permanent water provided by irrigation canals and fields associated with rice agriculture as well as wetland habitats provided by conservation efforts.  Giant garter snakes rely on cryptic behavior to hide from predators, and while their most common coloration is fairly dull, they paradoxically exhibit bright color polymorphisms. Their coloration ranges from dull gray to black with stripes ranging from yellow to bright orange, however so far these polymorphisms have only been documented anecdotally. Because garter snakes are live-bearing, the ability to thermoregulate precisely around the best temperature for development of young may allow darker females to produce larger healthier offspring or give birth earlier relative to lighter females. However, there is a potential trade-off in that darker coloration is more obvious to predators. In wetland habitats, there tends to be larger and denser vegetation, which may provide cover from visual predators for these darker snakes while foraging, allowing them a fitness advantage that is unavailable to snakes inhabiting sparsely vegetated irrigation canals. In collaboration with the U.S. Geological Survey, I will investigate how giant garter snake coloration may be linked to broader conservation of the species in these two distinct habitats. The results of this study will elucidate not only how many discrete color and pattern variations are present in giant garter snakes, but also the genetic underpinnings of color polymorphism in this threatened species as well as how this trait associates with the species' ecology in both mitigated wetlands and agricultural environments.