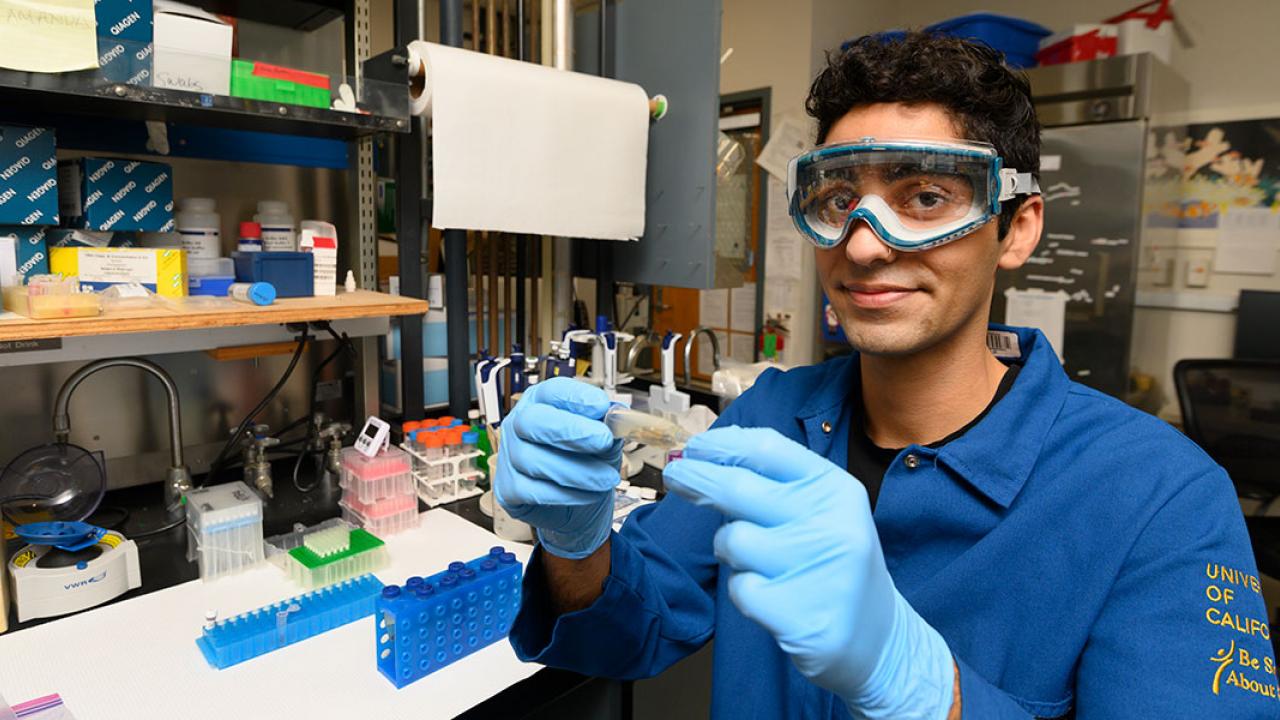 Congratulations to Shayan Kaveh who was just featured in the UC Davis Magazine! Please see Shayan's feature below where he discusses his experience as an undergraduate research intern at the GVL and visit the UC Davis Magazine site for full article written by Josephine Thornton.

Small things can have big meanings. That’s something Shayan Kaveh has learned during his time interning at the Genomic Variation Laboratory on campus. As an intern there, the Oakland raised fourth-year conducts eDNA extractions, a relatively new technique focused on environmental deoxyribonucleic acid.

“I intern for phD student, Ann Holmes, which is amazing,” said Kaveh. “I’ve gotten to do a mixture of fieldwork, as well as a lot of lab work.”

Kaveh has interned at the lab for two quarters. He spent the summer conducting ecological research in Yolo Bypass on the bat population, using eDNA to determine their eating patterns. To do so, Kaveh extracts and conducts processes on eDNA found in bat feces. “What the bats are eating is valuable information to local rice farmers and other people in the area,” explained Kaveh. “ If we can determine what they are eating, perhaps rice farmers will invest in features that make the area more habitable for bats, so they can continue to provide pest control for the farmers.”

In addition to their work in the Yolo Bypass, Kaveh and the team have tracked the fish species in Putah Creek and extracted pollen eDNA to discover bees preferences in the Sierra Nevada. “I’ve got to have a lot of different experiences,” said Kaveh, who recently spent time in the Delta by Suisun City, tracking endangered and invasive fish species in the area. “Going through the Delta on a boat was insane. I didn’t know that was what a wetland actually looked like! It blew my mind.”

Kaveh credited the welcoming environment of the lab for much of his success. “Ann has been a mentor, a guiding friend and a boss,” said Kaveh. “Being around such welcoming people in a more casual setting has made me more confident. Even as an undergraduate intern, I’ve always been included in the dynamics of the lab. It’s a cool space.”

The environmental toxicology major is now looking into graduate school, preferably for geography. “I want to study the intersection of toxicology, environmental science, and ecology in a human context,” he explained. “Through my internship, I’ve learned skills that I wouldn’t have in class. I feel equipped for whatever comes next.”